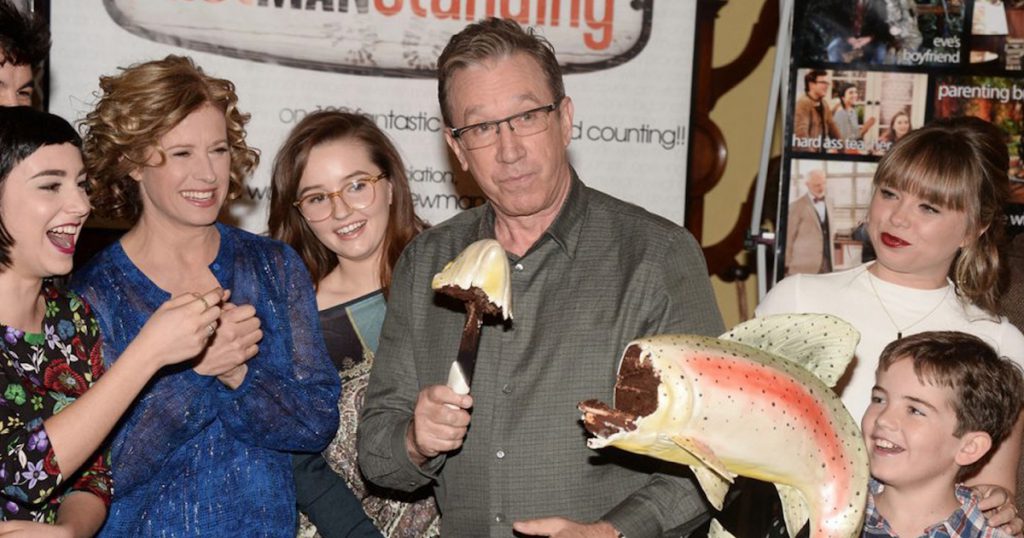 I’ve seen every episode of Last Man Standing. Some multiple times. It is one of the few sitcoms that my wife and I can watch without feeling that our values are being assaulted. I’ve recommended it to several family members and friends. It’s fair to say that I’m a fan.

I was among the shocked when the ABC heads decided to not renew the show. Although it had good ratings for a Friday, a loyal fan base, and a talented cast and crew, the bean counters at ABC questioned the value of renewing the show. Since none of the network heads watched the show, because the pro-traditional-family and pro-christian viewpoints didn’t connect with them, no one at the network pushed to get it renewed.

It’s Not A Conservative Show

When ABC made the announcement, many people referred to Last Man Standing as a conservative show. When it began six years ago, I didn’t think of the show in political terms. I always recognized the show as depicting traditional family values, but I never saw it as right-leaning. If I were to watch with political glasses, I would say it is balanced.

There is Tim Allen’s character, Mike Baxter, a right-leaning successful businessman who has three daughters, one of which usually sides with Mike politically and socially. He has a neighbor who is a democrat and, in the world of the show, likely voted for Obama and later Hillary. Mike’s wife, his other two daughters, and his co-workers, are all down the middle, with differing views on different issues. Then there is Mike’s son-in-law, Ryan, a left-leaning socialist progressive from Canada. Ryan gets just as many swipes at the right as Mike does at the left. And both sides are funny. Truly funny. Even when it is at the expense of my ideologies.

It is an ideologically balanced show, yet so many of its fans and critics refer to it as right-leaning. True, the main character is right-leaning in most instances, but as mentioned, there are plenty of other characters to even it out. Furthermore, Mike listens to Ryan, and respects him for not being afraid to stand up for his viewpoints.  In most instances, I do side with Mike, but I have to admit that I agree with some of Ryan’s arguments.  But really, it is a comedy, and it simply makes me laugh.

The wasteland of television is so slanted, when there is a balanced show, it’s called right-wing conservative pro-Trump.

Modern Family, which I contend is rarely funny anymore, is slanted, and has become far too preachy and amoral. And Phil, one of the dad’s in the show, is an absolute dope, not-funny, and a horrible example for the young males who watch the show. More on that point in an upcoming post. When Last Man Standing and Modern Family are ideologically compared, the former leans to the right, but that is just because the latter is so slanted to the left.

ABC is bringing back Rosanne Bar, who in 2011 called for the beheading of bankers. I somehow don’t think that show will be ideologically balanced.

If TV networks, both on the entertainment side and news side, want to know why viewership is down and why they are criticized and distrusted by many, it is because middle-america is not represented in board meetings, it is not accurately depicted, and it is rarely championed. In fact, I would say, middle-america is too often mocked on main-stream TV.

What’s wrong with putting on a TV show that promotes and depicts differing ideologies? Why ignore and fail to serve certain demographics? There’s money to be made after all. There are plenty of people who find Modern Family to be funny. But there are plenty of people who don’t, and have grown fatigued with the pro-homosexual agenda that hollywood continues to spew out. Why not produce and air something that appeals to those folks? And for the record, despite how it is reported on the news and depicted in fictional TV shows, middle-america is not anti-gay nor are we homophobes, we are simply not pro-homosexuality and we are not looking for pro-homosexual content on TV.

As mentioned, I initially didn’t view Last Man standing through a political spectrum. I started watching it when the first episode aired because I like Tim Allen. I continued watching it because it made me laugh. I have stayed loyal to the show because my values were not overly mocked or assaulted. I cannot say the same about Modern Family.

I know several people who watched Last Man Standing because their idealogical viewpoints are fairly represented in the show. No matter what ultimately led to ABC’s decision to cancel it, from the perspective of middle-america with pro-traditional-family values, ABC said, “screw you and your christian traditional values! We don’t want you! We want the fascistic socialist Rosanne Barr!”

For us in middle-america, when our values are ridiculed or assaulted on TV, we rarely protest. We shrug our shoulders, turn the channel, pop in a DVD of our choosing, or we get up and go mow the lawn. If we don’t like something, we simply don’t watch it. However, we are growing fatigued of our principles constantly being poked, and it makes us not trust the media. We are liberty minded, and we have a worry of the size of the federal government and its overreach, and we are tired of liberty minded people being depicted as domestic terrorists as in ABCs’ Designated survivor.

We know that a person with a penis is a man, and a person with a vagina is a woman. It is XX and XY, and yet, we are called science deniers because we merely question the incestuously peer-reviewed research papers that say the earth is going to boil, or freeze (depending on the specific report), within the next 15 years if we keep driving our rural vehicles. We are responsible gun owners who find it insulting that we are depicted as paranoid vigilantes who don’t care about the safety of children. It appears to us that the people in California and New York are the only people the TV networks care about.

One thought on “The Cancellation Of Last Man Standing: Screw You, Middle-America!”