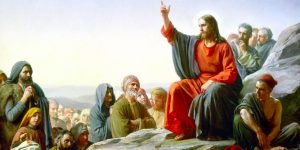 Jesus Christ was an enemy of the state. He was executed for being an enemy of the state. Any attempts to repaint Jesus as a loyal citizen always supporting the state does not do any justice to Holy Scripture. And frankly, it is dishonest. And if that makes you feel uncomfortable for any reason, then don’t bother reading Holy Scripture.
Throughout holy text, Jesus was frequently at odds with the government. He and His family were forced to live as exiles in Egypt. He continually exalted God’s laws above state authority. During His ministry, the rulers at the time frequently sought to have Jesus executed. He criticized government officials, even referring to one as an annoying destructive pest. He told government officials to stop stealing from citizens. And there’s more.

Christ didn’t advocate for lawlessness or anarchy, and neither am I. He had a divine mission, earthly consequences be damned.
Again, to paint Christ as a loyal citizen who advocated for blind obedience to the state, and to never criticize the state, is scripturally not accurate.