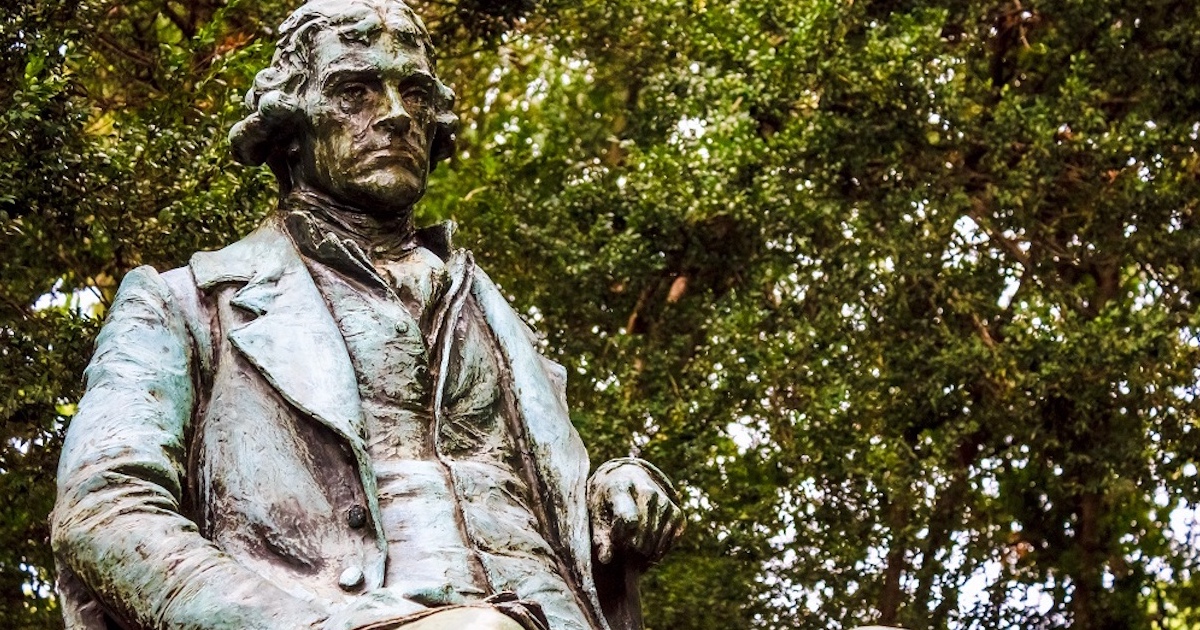 Destruction is part of human nature. I get it. So, it should not be surprising the amount of iconoclasts in the “social justice” mobs of today; the iconoclasts destroying statues, and destroying history.

Iconoclasm is nothing new, it’s been around since shortly after creation. The destruction and discrediting of essential figures of civic and spiritual liberty has long been a tool of the devil. This tool will continue to be used with evil purpose until Christ Himself puts an end to it.

Lies about our country’s framers have been perpetuated by iconoclasts for decades, and it is high time we quarantine these lies and discredit their perpetrators.

There is absolutely no evidence which proves Thomas Jefferson fathered ANY children with the slave Sally Hemings.

An unproven claim has been told for centuries. Up until the late 1990’s, all which iconoclasts have had to present as evidence of Jefferson’s sexual immorality had been spotty newspaper articles from the early 1800’s, and conflicting oral histories.

But in the late 1990’s, DNA “evidence” of Jefferson’s congress with Sally Hemings surfaced, and the media was all too happy to spread the glorious news.

Genetic testing shows that Thomas Jefferson almost certainly fathered a child with one of his slaves, Sally Hemings…

The “news” rapidly spread to state and local news agencies.

But how did it all start? With a DNA study which was accompanied by this article from the periodical Nature, written by Joseph Ellis.

The article which was written by “Historian” Joseph Ellis, is the article the media latched upon. In it, Ellis wrote:

Almost two hundred years ago Thomas Jefferson was alleged to have fathered a children by his slave Sally Hemings. The charges have remained controversial. Now, DNA analysis confirms that Jefferson was indeed the father of at least one of Hemings’ children.

And with that, a founding father became discredited. Jefferson became a deadbeat dad. And the news quickly spread. And Democrats and their cohorts in the media were all too happy to disseminate the wonderful news. Why? Because of whom was president at the time.

Bill Clinton was undergoing public scrutiny and was to be undergoing an impeachment trial as the result of his sexual deviance. Surely, if someone as great as Thomas Jefferson had a wandering eye and wandering morals, then we must dismiss the sexual escapades of every president, including Bill Clinton.

Politically, the Thomas Jefferson verdict is likely to figure in upcoming impeachment hearings on William Jefferson Clinton’s sexual indiscretions, in which DNA testing has also played a role.

And it was used frequently and repeatedly by the media for Clinton’s defense. The country was bombarded with the news that Jefferson fathered Sally Hemings’ children.

But… oops. There actually was no DNA evidence which proved Thomas Jefferson fathered any of Sally Hemings’ children.

The report to which Joseph Ellis alluded only proved that a Jefferson fathered one of Sally Hemings’ male descendants. In order to test ancestry for a case like this, male DNA needs to be compared, because only the Y chromosome (male) survives and is carried through generations.

So, for the DNA analysis, a male descendant (living in 1998) of one of Sally Hemings’ sons, was available, and it needed to be compared to a male descendant of Thomas Jefferson which had the Jefferson Y chromosome. But there were none living in 1998. Thomas Jefferson had no son who grew to adulthood. The mainstream media failed to mentioned this fact in all their reporting. No DNA from Tomas Jefferson or his direct descendants were used in the DNA analysis. The “historian” hack Joseph Ellis failed to mention this tidbit in his Nature article which started all the hoopla.

Those concerned with truth more than politics, unlike Joseph Ellis, pushed back against the periodical Nature for their misrepresentation of the DNA analysis. The publication acquiesced by printing this very minuscule retraction, which really was just a half apology:

The title assigned to our study was misleading…

This retraction, more of a bombshell than the factually impotent first article, did not receive the hoopla and fanfare from the media. No bombardment from news reports. Because it didn’t serve the mainstream media’s agenda.

Retraction printed, the DNA analysis clarified, but the damage to Jefferson’s reputation had already been done, thanks to Ellis, and the lazy or politically driven media.

Joseph Ellis, in his original Nature article, either purposely misled his readers and the media by re-molding the DNA analysis, or he ignorantly misunderstood the lack of evidence. Either way, his status as “historian” should always be brought into question and his writings, especially when nakedly politically driven, should be read with a grain of salt.

As to whom is Eston’s father, we can only look to circumstantial evidence beyond the DNA analysis. And this circumstantial evidence points more to Randolph Jefferson, the presidents younger brother, than it points to the president himself. Randolph Frequently socialized with the slaves at Monticello. The president was not known to have done this. Randolph was in the area at the possible time of the conception of Eston Hemings. Hemings’ child baring years corresponded to the years in which Randolph was a widower. The family of Eston Hemings contain names of Randolph’s family. There’s more, but this point is not the goal of this writing. Besides, it is all circumstantial.

There is no DNA evidence which proves Thomas Jefferson fathered Eston Hemings, or any of Sally Hemings’ other children.

If someone, or some group, uses this DNA analysis to discredit Jefferson, and also dismisses the actual facts behind the analysis, they are not truth seekers, but iconoclasts. They want to destroy just to destroy.

“But Jefferson was a racists!”

Well, that isn’t the point of this writing, but since I will likely get comments on this issue from the social justice mob,  I will briefly address this claim.

What evidence do you have? He owned slaves, true. But all this proves is that he owned slaves. Mainly through inheritance.

“Then why didn’t he just free them? ”

Because he couldn’t. Prior to independence, King George wouldn’t allow it. This is one of the things that prompted Jefferson to tell King George to go pound sand in his first draft of the Declaration of Independence. In the first draft, Jefferson blasted slavery and the king for inflicting the immoral practice on the colonies.

“Then why did Jefferson take that part out of the final draft?”

He didn’t, others on the draft committee did, in order to persuade the southern colonies to join independence. And Jefferson was not happy about it. According to Jefferson, every word was precisely chosen in the first draft. As a writer, I can fully empathize with Jefferson on this point.

“Then why didn’t he free his slaves after independence like Washington did?”

“Then why didn’t Jefferson use his money to do that?”

What money? Jefferson, throughout his life, had severe financial troubles and could not pay the hefty fines and the cost of living for freed slaves.

“But what about this, and that, and the other blah blah bloopitty bloop?”

Yeah, I know, there are lots of questions pointed to Jefferson regarding slavery. Some of them legitimate. However, we cannot apply modernism to this situation. Using the present day as a moral filter of the past is intellectually and historically dishonest. In the late 18th century, slavery had been around for several centuries. It was part of the culture. A culture that we cannot fully understand today. By the way, once our country was founded, we very quickly eradicated the immoral act of slavery, much quicker than other countries had and did.

Jefferson is a complex individual. To exercise historical minimalism and modernism with Jefferson is plain lazy.

Oh, and he was NOT anti-religion.

Beans don’t burn on the grill.