In April of 1775. British Regulars were commanded to move on Concord Mass, to seize military equipment being stored by the colonists. They also had the mission to bring back the bodies of John Hancock and Samuel Adams. Below is an account from a soldier who was part of this mission. This was published in The London Chronicle dated Jun 15 – 17, 1775. 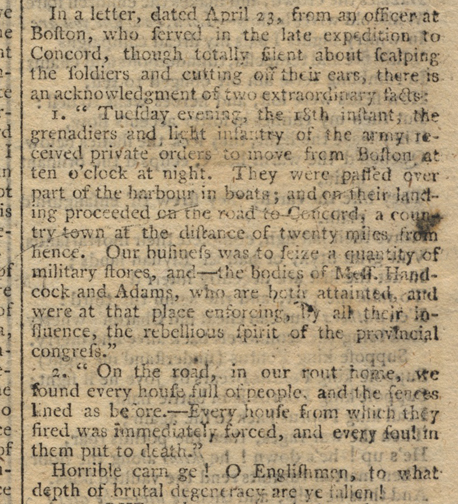 In a letter, dated April 23, from an officer at Boston, who served in the late expedition to Concord, though totally silent about scalping the soldiers, and cutting off their ears, there is an acknowledgment of two extraordinary facts:

1. “Tuesday evening, the 18th instant, the grenadiers and light infantry of the army received private orders to move from Boston at ten o’clock at night. They were passed over part of the harbour in boats; and on their landing proceeded on the road to Concord, a country town at the distance of twenty miles from hence. Our business was to seize a quantity of military stores, and – the bodies of Mess. Handcock and Adams, who are both attainted and were at that place enforcing, by all their influence, the rebellious spirit of the provincial congress.”

2. “On the road, in our rout home, we found every house full of people, and the fences lined as before. – Every house from which they fired, was immediately forced, and every soul in them put to death.”

Horrible carnage! O, Englishmen, to what depth of brutal degeneracy are ye fallen!