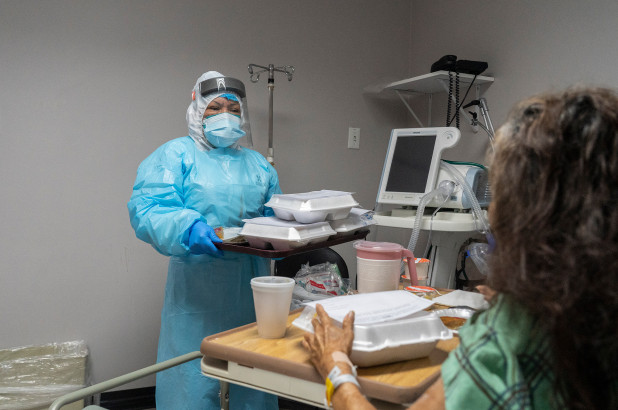 I saw this doom and gloom headline on Saturday: Hospitals in Idaho, Pennsylvania, Texas overwhelmed by COVID-19 patients.

But it’s not based in contextual information or facts.

In Idaho, National Guard troops were called in to help triage patients outside an urgent-care facility turned COVIID-19 clinic, while the staff inside work 12-hour shifts.

Those in the National Guard were not ordered to do so. Those in charged asked for volunteers. So the need was not dire. 12 Hour shifts is normal for such incidents. ALL hospitals have plans for such emergencies. They are mandated by govt to have such plans. Part of those plans are utilizing the National Guard and using federal funds. Very few hospitals and health care facilities have reached this point.

Officials fear a continued surge of infections could force difficult choices about what to do with patients when there’s no more room or anyone available to treat them.

This is not based on any contextual or stratified metric. It’s based 100% on fear. And, it fully points out the hospitals are not overflowing with patients or are short of staff. But IF they ever reached such levels, they have the National Guard, and funds for temporary facility expansion. They already know what to do, and they already have the tools to do it.

“When would we reach absolute capacity? I just don’t know. But we’re nervous,” Barton Hill, vice president of St. Luke’s Health System, which has hospitals in southwestern and central Idaho, told The Associated Press. He suggested that health care workers could have to start choosing who gets treatment and who doesn’t in the next two weeks.

So, there is currently no problem with capacity. Just gloom and doom predictions that are not based on any contextual or stratified metric. In Idaho, we get these gloom and doom predictions every two weeks or so. And they have yet to become reality. This same fear-based public manipulation occurred in the spring, and hospitals were fine. National Guard was not needed, no emergency expansion. It’s all based on fear and the possibility of expansion. But again, hospitals already have the plans and tools to do so. They are mandated to have such plans and to have the ability to expand. But they fully admit they have not reached that point.

Referring to this stat as being overwhelmed is absurd and dishonest.

ICU of 74% is also low. Even 100% ICU is not “full”. Hospitals can expand to 125%. it’s a government mandate. Part of emergency plans. Which were established years ago. And they can temporarily expand even more if needed.

What about Pennsylvania? I bet they are overwhelmed because of higher population density than Idaho.

Nope. 17% of patients tested positive for covid, 73% in-patient beds occupied, 82% ICU beds occupied. Those are all low numbers, especially for this time of year. December and January are peak flu and pneumonia season.

True. Some hospitals, throughout the country, are reporting 100% ICU occupancy. Yeah, in years prior to covid, they were at 100% year round. And they can temporarily expand when needed. Nothing new.

Gloom and doom predictions rarely provide context and stratified metrics. What were the metrics looking like this time last year, two years ago, three years ago? During the 2009 H1N1 pandemic? The 2018 flue season?

To mandate economy destroying and educational damning public policy based on this fear manipulation is unjust, unreasonable, unprecedented, and demonic. These mandates and lockdowns have DESTROYED lives and livelihoods. All because of fear that is based in psychosis and lies, rather than in reason and facts.

We’ve had “overwhelmed” hospitals before, and we didn’t shut down economies and destroy lives for it.

Hundreds of these type of headlines and articles from 2018:
“Hospitals Overwhelmed by Flu Patients Are Treating Them in Tents.”
“California hospitals face a ‘war zone’ of flu patients — and are setting up tents to treat them.”

One of the disgusting components of the govt and medical response to covid is the manner in which all previous knowledge and established guidance regarding lockdowns and quarantines got thrown in the trash by some “experts” and replaced with new, contradictory doctrine with no established scientific backing. The evidence, established in years past and this year, is quite strong that these mitigation efforts do nothing except inflict societal, economic, emotional, and mental destruction. Solid evidence that they work to prevent the spread of SARS-Co-V-2 is non-existent.

It seems the whole world has lost all sense of historical perspective. Egged on by government hubris and manipulation, and the lazy, inept, and intellectually dishonest media.

There is absolutely no honest or legitimate reason for the terrible reporting coming from the media when ANYONE can use official research tools linked below.

I suggest you all bookmark the following tool, and use it to check and battle the lies we are all being told. It may be a sanity saver. The following link is from where I found all the hospitalization data noted above.